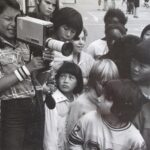 Grace Lee and fellow Beyond Inclusion members meet with PBS leaders in spring 2021. Latinx organizers, journalists and filmmakers confront PBS about the erasure of Latinx voices and stories in Ken Burns’ 2007 seven-part series, The War. And in 1987 at a U.S. Senate subcommittee hearing, Chinese American filmmaker Loni Ding asks a prophetic question: “Where is the public in today’s public broadcasting?”

PBS data referenced during May 2021 virtual meeting with Beyond Inclusion

“In preparation for @firelightmedia panel at #CAAMFest2021, we checked senior leadership across stations making up the majority of @PBS primetime.

Twitter thread from May 20, 2021. Do they display the “diversity of perspectives” required to “meet the moment”? Behold, leadership at @GBH #PBSam #PBSsowhite #thread

originally published in Current, May 14, 2007 by Karen Everhart

Voces Oral History Center and Defend the Honor, an archived website that includes letters and statements published following the release of the 14.5-hour World War II documentary by Ken Burns, which aired on PBS in 2007, and originally included no Latinx voices and stories.

Ancestors in the Americas

In November 1987, Loni Ding testified before Congress about public television, asking: “Where is the public in today’s public broadcasting?” The subcommittee finished hearings on the twentieth anniversary of public broadcasting with officials of various public broadcasting entities talking about the future of the government-supported service. Loni’s testimony starts around 21:40.

“A Formula for Change”: The Report of the Task Force on Minorities in Public Broadcasting circa November 1978, courtesy of Renee Tajima-Peña

This website or its third-party tools process personal data. To find out more about how your information is used please read our Privacy Policy.If you wish to opt out, you can do so by clicking the link: Do not share my personal information.
Accept All
Manage consent

This website uses cookies to improve your experience while you navigate through the website. Out of these, the cookies that are categorized as necessary are stored on your browser as they are essential for the working of basic functionalities of the website. We also use third-party cookies that help us analyze and understand how you use this website. These cookies will be stored in your browser only with your consent. You also have the option to opt-out of these cookies. But opting out of some of these cookies may affect your browsing experience.
Necessary Always Enabled
Necessary cookies are absolutely essential for the website to function properly. These cookies ensure basic functionalities and security features of the website, anonymously.
Functional
Functional cookies help to perform certain functionalities like sharing the content of the website on social media platforms, collect feedbacks, and other third-party features.
Performance
Performance cookies are used to understand and analyze the key performance indexes of the website which helps in delivering a better user experience for the visitors.
Analytics
Analytical cookies are used to understand how visitors interact with the website. These cookies help provide information on metrics the number of visitors, bounce rate, traffic source, etc.
Advertisement
Advertisement cookies are used to provide visitors with relevant ads and marketing campaigns. These cookies track visitors across websites and collect information to provide customized ads.
Others
Other uncategorized cookies are those that are being analyzed and have not been classified into a category as yet.
SAVE & ACCEPT
Scroll to Top